Majra, a tiny village in Paonta Sahib, is the hotspot of Himachal unit of Tablighi Jamaat. It is headed by Hukamddeen, a former HP Police constable who is learnt to have taken premature reirement a few years ago.

The jamaat head has come under the scanner after three sect members, who attended the Nizammuddin congregation in Delhi, tested positive for coronavirus in Una. The trio, belonging to Mandi district, were deputed by the HP jamaat head for the event, sources said.

Also, 11 persons who were apprehended near Nerwa in Shimla by the police on Wednesday were dispatched from Majra to their villages Qaidi and Piuntra, revealed members of the community who have come forward seeking action against all those who did not follow the quarantine protocol and instead hid information on those who attended the event.

The role of the state jamaat head has also been brought to the notice of Chief Minister Jai Ram Thakur.

The civil society members have expressed concern over the incident. They told The Tribune that

Hukkamddeen had influenced a large number of Muslims in Himachal. "It is he who assigns duties to his followers and sends them to different mosques in Himachal," they said. He reportedly maintains a register of all followers and assigns them religious tasks.

Meanwhile, rapid response teams of the Health Department are likely to converge at Majra to ensure social distancing and putting the Delhi event attendees and their near ones in quarantine, sources said.

Shimla Deputy Commissioner Amit Kashyap held a meeting of all religious leaders seeking their cooperation to combat  spread of Covid in the state.

Coronavirus latest: at a glance

A summary of the biggest developments in the global coronavirus outbreak 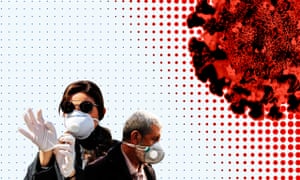 Key developments in the global coronavirus outbreak today include:

Spain’s coronavirus death toll rose to 10,003 on Thursday, up from 9,053 on Wednesday, an increase of 950. On Tuesday Spain had recorded 864 deaths related to coronavirus, its previous highest figure.

The Cambodian government has been accused of manipulating the coronavirus pandemic to assert absolute power “over all aspects of civil, political, social, and economic life”.

Iran’s death toll from the coronavirus has reached 3,136, with 124 deaths in the past 24 hours, the health ministry spokesman Kianush Jahanpur told state TV, adding that the country had 50,468 total cases.

France to set up road blocks to block Easter holidaymakers

France’s interior minister Christophe Castaner warned the country to stay at home as the Easter holidays begin. He said roadblocks would be set up on major highways and extra police or soldiers dispatched to train stations and airports to verify the documents of anyone stopped out and about.

Indonesia reported a further 13 deaths and 113 new cases, taking its total number of deaths to 170 and its confirmed infections to 1,790. South Korea has reported 169 deaths and 9,976 infections, according to the latest figures released there.

According to data collected by researchers at Johns Hopkins University, 951,901 (as of 12pm BST) people around the world have become infected, 48,284 of whom have died.

US intelligence accuses China of playing down crisis.

American officials reportedly believe China has been underreporting the total number of cases and deaths. The conclusions of a classified report from the intelligence community to the White House were revealed to Bloomberg by three anonymous officials who declined to detail its contents.

President Trump is also resisting calls to issue a national stay-at-home order to stem the spread of the new coronavirus despite his administration’s projections that tens of thousands of Americans are likely to be killed by the disease.

… we’re asking readers like you to make a contribution in support of our open, independent journalism. In these frightening and uncertain times, the expertise, scientific knowledge and careful judgment in our reporting has never been so vital. No matter how unpredictable the future feels, we will remain with you, delivering high quality news so we can all make critical decisions about our lives, health and security. Together we can find a way through this.

We believe every one of us deserves equal access to accurate news and calm explanation. So, unlike many others, we made a different choice: to keep Guardian journalism open for all, regardless of where they live or what they can afford to pay. This would not be possible without the generosity of readers, who now support our work from 180 countries around the world.

We have upheld our editorial independence in the face of the disintegration of traditional media – with social platforms giving rise to misinformation, the seemingly unstoppable rise of big tech and independent voices being squashed by commercial ownership. The Guardian’s independence means we can set our own agenda and voice our own opinions. Our journalism is free from commercial and political bias – never influenced by billionaire owners or shareholders. This makes us different. It means we can challenge the powerful without fear and give a voice to those less heard.

Your financial support has meant we can keep investigating, disentangling and interrogating. It has protected our independence, which has never been so critical. We are so grateful.

We need your support so we can keep delivering quality journalism that’s open and independent. And that is here for the long term. Every reader contribution, however big or small, is so valuable. Support the Guardian from as little as $1 – and it only takes a minute. Thank you.